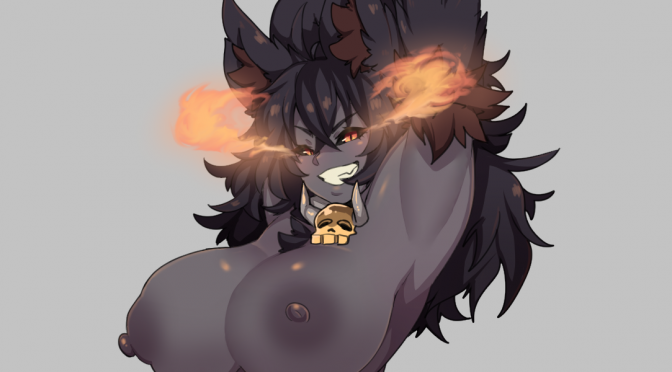 If you guys want a good mental image of what Beatrix looks like, here is a character profile I made

Standing at a little more than seven feet tall, the Hellhound towered over pretty much every single man she had ever been with, but that suited her just fine. Like all other Hellhounds, she was naturally very dominant towards her partners and if that height difference further accentuated that, so be it. Her skin was dark as midnight, a perfect ebony complexion that only further accentuated her outright scandalous curves and served to make her glowing red eyes, always lit up with mischief and lust, even more hypnotizing. Her face was beautiful, rivalling or perhaps even surpassing the most beautiful humans and succubi, sporting defined cheekbones, sultry eyes surrounded by long licks of orange flames reaching out past her head that somehow managed to make her look even sexier, a cute button nose and lush, full lips, beneath which were sharp, pure white fangs which contasted nicely with her dark complexion when she smiled. Her long red tongue, which she often used to lick her lips when she had found a tasty new prey, had been used with incredible skill and dexterity to milk the cum out of those she deemed worthy. Atop her head was a wild mane of pitch black hair, cascading across her forehead and down to the middle of her back, topped by her fluffy black ears, standing up straight at the top of her head. Nearly every monster girl has a point on their body unique to their physiology that is especially sensitive to touch, such as the tip of a Lamia’s tail or the wings of a Succubus, and Hellhound’s were no different, as a matter of fact, they had two. Just touching a Hellhound’s ears would make them squirm in pleasure, and actually stroking the soft fur of them would send their entire body into a state of bliss, and if a man were to grab their soft, fluffy tail by the base, right where it connects with her body just above her ass, no power in all the realms could stop them from cumming. Beatrix had these genetic weaknesses, these external pleasure centers, and had found out the hard way that hers were even more sensitive than most.

There were various other ways Beatrix differed from her brethren, but the most obvious example was her physique. Most Hellhounds were more on the slender side, petite and lithe in body shape if not height, but Beatrix was nothing like that. Beatrix had a body that would make any Amazonian green with envy. She was incredibly fit and well muscled, her stomach displaying rock hard abs so defined you could use them as a washboard, the hard muscle looking soft as iron and yet underneath such soft skin that the illusion of softness was maintained. Her arms were ripped, taut muscle rippling beneath her pitch skin, yet most of that was hidden by the smooth fur that covered nearly all of her arms, the downy black fur slowly turning a mauve colour leading down to her hands; large and similarly covered with soft hair, each finger tipped with a wickedly sharp purple claw that could rend a human warrior with a single swipe. The point where fur met skin was topped with massive tufts of the same mauve fur, looking almost like feathers and framing the toned muscles of her upper arm. Her legs were much the same, though expounded. Her thighs were massive, muscular and powerful, yet soft to the touch and entrancing. More than one human adventurer had sought her out solely to get his head between them. Like the arms, the soft skin eventually gave way to softer fur that lead down to strong paws tipped with purple claws like talons, although significantly more thigh was shown than upper arm with the fur only beginning just above her knees, showing off the entirety of her enticing thighs that lead to the even more enticing pussy, constantly wet and hot, though surprisingly free of much hair.

The hard muscled physique of her body did nothing to diminish her bust or ass, in fact it only made them appear even more plump and appealing by contrast. Her breasts were huge; at least as large as a human head and perfectly round, placed perfectly on her large frame without even a hint of sag, each one tipped with a delectable black nipple so sensitive to touch. These melons were perfectly framed by a small tuft of her directly above them, patterned to look almost like a lick of flame with it’s brilliant orange and red hues accentuating her bountiful, bouncy breasts beautifully. Her main asset, however, was her ass. It was huge, which was no surprise considering her wide, sumptuous hips, each perfect semicircle of ass dwarfing all but the largest cocks placed against it as humans were so eager to do with her. Despite it’s girth, they were perfectly shaped, as though it was sculpted perfectly by the God of Asses, which it may well have been, the huge mounds seeming to defy the concept of gravity.

All of this, topped with her near insatiability for sex of any and all kinds, was what made her considered the pinnacle of Hellhounds.

We all know the classic stories. Boy meets girl. A man goes on a journey. A stranger comes to town. An ancient near demi god takes in a human man. Wait maybe not that last one. But the last one is this story. Can Kaori find joy in the company of others again?

A Marine, a Manticore and a Baphomet walk into a bar…

The real meaning of the season is giving of yourself to others. Unfortunately for this Mall Santa, certain individuals want him to give of himself very directly, and perhaps far more literally than he had intended.

Nurse Artemis certainly knows how to make an impression. Dark skin, bright red hair, a firm, muscular body with child bearing hips and cleavage you could drown in… crowned by glowing red eyes and bright white fangs. A vampire is an apex predator designed to hunt human beings… and now she has her eyes set on one of her patients, and there’s no going back.

A lost viking in a land of monstrous women finds himself a captive of slavers. What is their intent? Where are they bound? And what fate do his gods have in store for him adrift from the world of his birth?

The minotaur grinned and turned you around. Her strong fingers started rubbing against your sides, making you laugh and squirm. While the holstaur had been soft and chubby, she felt ripped and muscular. Her biceps were quite noticeable, and you could see clear hints of muscle all over her body, especially in the prominent abs. Her tail was swishing back and forth excitedly. You weren’t sure what she intended, but it was likely up to no good.

‘Oooooooh,’ she said, her hand brushing against your hardening penis. ‘Is that a milking pail in your pocket, or are you just happy to see me?’

‘Oh, Master’s so energetic!’ giggled the holstaur as her fingers teased your own asshole, making a few larger shots of pearls shoot over her cleavage. ‘He came so much, his cream is so thick!’

kristofer4512: What i don't realize is in truth how you are now not actually much more well-preferred than you may be now. You are so intelligent. You know thus considerably with regards to this topic, made me in my view imagine it from numerous various angles. Its like women and men are not fascinated except it is something to accomplish with Lady gaga! Your personal stuffs excellent. All the time maintain it up!

A writer of many monstergirls, though with a weakness for manticores and ushi-oni. I've been writing for a few years now and look forward to continuin Read More
Some_Ordinary_Guy
1 post(s)

Hey there everyone! I'm just a college student who was peer pressured into writing. May or may not be a good writer. Read More
StolenDonut
1 post(s)