Three Brothers in the Age of Monster Girls (Isidore: Chapter 1)

“Remember son, a man is defined by what he does. So long as there are signs of his deeds, he will be remembered forever”

These words echoed in Isidore’s mind as he walked along the long and lonely road before him.

His dark green cloak flapped lazily with the light breeze as the sun began to set. The leather armor beneath the green garment as well as the tools and weapons on his belt rattled and clanged lightly with each step he took. The hood of his cloak masked his face from the twilight of the summer day for the most part, as one would have to have gotten very close to make out his features. Hidden in the partial shadow of his hood was the face of a man in his mid-twenties. Light stubble formed the beginnings of a full beard on his angular face. Fair skinned with black hair and different colored eyes, the left brown and right one green, he was handsome in many regards, though his shaggy hairstyle and somewhat haphazard neckline would certainly keep him out of the circles of human nobles, not that he particularly cared for their company.

He kept a black mask tucked under his chin most of the time, which served him well in the thicket and protected him from the cold and whatever small particles flew by him with the wind, but for now it was too uncomfortable to put on.

Eyeing a small bunch of boulders in the grasslands two hundred meters away from the road, he decided to make his camp there for the night, seeing as how he wouldn’t make it very much farther before nightfall. He scanned the area for threats from up above and hiding in the grass as he slowly made his way over, taking care not to step on any sort of trap or alarm in the form of scatted gravel or twigs. He rounded the corner of the nearest boulder, seeing nothing on the other side or within the small semicircle between the rest. After making sure the rest of the perimeter was clear, he sighed in relief and set to work on the fire.

Gathering a few small stones for a pit, he laid some kindling around a small log he had found and lit it with his flint and steel, the flames taking life quickly. Isidore sat down in the grass and took a few pieces of dried meat from one of the pouches in his belt. He savored the smoky and salty flavor in his mouth as he watched the sunset.
————————————————————————————-
Years of sleeping on your own can make one jumpy. This is doubly true if you live the life of a roaming mercenary, such as Isidore. Even the sound of rustling leaves is enough to spring him to his feet, which he did this night and many more before.

Isidore drew his weapons as he awoke, pure muscle memory landing him in a fighting stance, the one taught to him by his father.

In his right hand was a double edged short-sword about half as long as his arm, and in left hand was a single edged knife held with the blade facing down. His stance had his legs apart and knees bent, his front toe matching up with his rear heel. His sword arm was in front and his knife hand was behind it, fingerless leather gloves allowing for a tighter grip. This stance allowed him a wide range of motion for attacking, though as with anyone without a shield, his defense was limited. Not that he needed one anyways.

His eyes darted around the camp, looking for anything that might jump out of the shadows. The remains of the fire still smoldered with a few tiny embers still glowed in the night, though only the moon provided any sort of light in the darkness. Carefully, he turned to look behind him, his heart rate skyrocketing as he heard the grass nearby rustle.

Whatever was in the grass was getting closer, and fast. Isidore braced himself for what he was about to face. Much to his surprise it was a small rabbit with light brown fur. He relaxed a bit and chuckled to himself for getting so worked up over something so insignificant.

Suddenly, a shout full of rage erupted from above him. In a matter of moments he was surrounded by four men. Banditry was common along the roads in human territories, which came with the fractured nature of Man. The Order had far larger concerns with their war to fight, and many cities were either caught up trying to support the levies from the governments for troops or were too concerned with trying to feed themselves rather than finding the time to form a militia of some sorts.

He observed the men before him. A professional army would consider these men to be a disgrace. Their weapons and armor were mismatched and in various states of disrepair, their posture was garbage and they had no sense of strategy about them. To Isidore, the only thing they had going for them was their scary faces, which he promptly let them know.

“You know you probably would have had a chance if you didn’t announce your presence like that. I mean , there’s nothing wrong with a good battle cry and all, but you really should think about who you’re dealing with before you charge in like that”, he said matter-of-factly, his voice somewhat deep and appealing.

The bandits were not amused.

“We’ll see if you can talk wise like that after we cut your tongue out”, the leader said in a gravely voice. With that, he charged, sword raised over his head. Isidore deflected the blow with his sword as he stepped forward into the man’s guard. In an instant, he brought up his knife and slashed the man’s neck. Seamlessly switching to the opposite stance, he punched the nearest bandit squarely in the face, blocking the strike from his comrade’s axe with his sword as he did so. He disengaged the third bandit as the fourth came around with a rusty claymore trying to take his head off. Isidore dodged out of the way, the bandit’s sword crashing into the remains of the fire.

The ragged man got the idea of flinging the ashes into the mercenary’s face, but instead of the hot ash hitting his intended target, the second bandit screamed in agony.

Isidore had slipped around the third and fourth bandit and grabbed the second, his left arm around the man’s neck and his right one pinning down his arm, locking him in a stress position, unable to wipe away the ash that was burning his face as he scrammed in pain. Isidore threw him forward into the fourth bandit and moved towards the third, slicing his unprotected side with his sword and finishing him off with a downward cut to the neck, nearly decapitating him.

The fourth bandit was panicking now, unsure of whether or not to continue fighting or to flee. Sadly for him, he didn’t even get a chance to raise or drop his claymore. There was a dreadful *schlick* noise as Isidore plunged his sword into the man’s chest, driving it though bone and muscle. He had missed the heart, but the pierced lung and terrible blunt trauma of the broken bones and battered tissue meant for a quick, but painful death. Isidore removed his sword as he saw the second bandit had decided to wise up and dropped his weapon, running away as fast as he could.

Isidore contemplated chasing after the man or trying to use one of his throwing knives, but he wasn’t very good with them yet, especially not in the dark, and he had no clue to where the bandit would lead him to.

“Count yourself lucky, I suppose”, he said with a quick smirk as he shook the blood form his blades and sheathed them back onto his belt. He looked down at what remained of his camp, blood from the dead bandits oozing into the soil. Seeing as how it would be rather unpleasant to sleep amongst the dead, Isidore stamped out what was left of the fire before searching the bodies and heading off, his eyesight having adapted to the darkness by now.

In all he walked away with twenty gold, not a terrible find, but he wasn’t about to lug their rotten gear back with him to try and sell. He wasn’t a huckster, and he had no intention of becoming one. Besides, the smell would remain on him for at least a day, and that was something he really wished to avoid. Letting out a loud and long yawn, Isidore made his way back to the road, unable to sleep thanks to the adrenaline and endorphins in his system.
————————————————————————————-
In retrospect, it’s an astoundingly bad idea to walk the roads at night when you’re tired, considering the many dangers a man can face, especially when they’re alone on the road in a region bordering the recently conquered Lescatie. You know, that really powerful religious kingdom that was conquered in pretty much one night in a fury of blood and ah….. other sticky fluids…..

Granted the Demon Realm was still consolidating their hold on the region……in a manner of speaking, and had yet to mass an assault on the next region, so there was no immediate danger yet, or so the Order proclaimed with their propaganda. Of course, that didn’t stop some people from packing up their belongings and trying to flee, nor did it stop various rogues, would-be heroes and other types of adventurers from seeking glory and profit.

So this begs the question; why was Isidore traveling down this road? Was he looking to make a name for himself? Was he hoping to strike it rich? Or did he just make a wrong turn hoping to make it to the Zipangu Region?

Whatever his reason, his more immediate concern was finding a new place to sleep. He’d been traveling for a long time with little rest, and his sleep cycle had been thrown off by the bandit’s attack.  Through sleepy eyes he looked for somewhere sheltered enough to make a camp, finding nothing of the sort. He yawned deeply as his vision became hazy.

Eventually, he saw a lone tree in the grasslands and walked over, collapsing into the soft grass as he did. Sleep is a precious thing for fighting men and women. You get as much as often as you can. Of course, it’s expected that you be smart about it. Not too many people can say sleeping alone in the grasslands near a contested border is smart, but if you’re tired enough you’ll most likely not care at all.

Of course,  you’d have to be extra ordinarily lucky to not be noticed sleeping out in the open. And Isidore was not that lucky.

Artwork done by one LazyRemnant through a DA commission 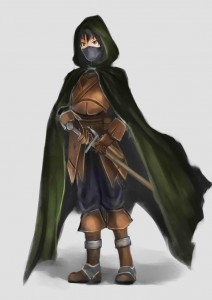 5 thoughts on “Three Brothers in the Age of Monster Girls (Isidore: Chapter 1)”