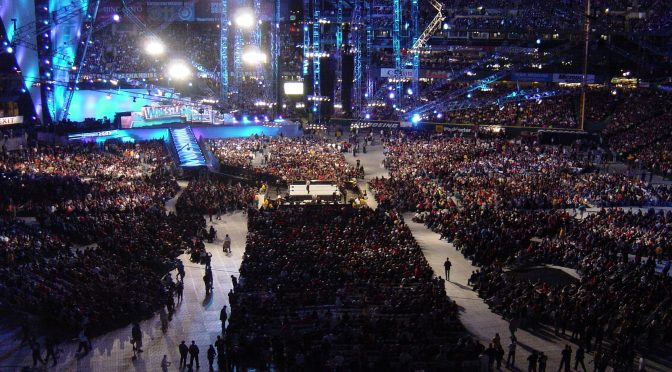 “That’s right Glenda!” The Ratatoskr replies to her fellow squirrely cohost, “It truly is a sight to see. Behind me the fans are going crazy, they are sitting at the edges of their seats, not believing what it is they are seeing.”

The camera zooms in to the crowd, the screams being heard in the background as several mamono and humans alike can be seen yelling towards the ring. Many are gripping the sides of their head, some are biting their nails, others are chewing on the neck of their shirts or anything else they can sink their teeth into, waiting for something, ANYTHING, to happen.

The camera returns to the Ratatoskr hosts.

“And what exactly is happening Amy?”

“THE IMPOSSIBLE!” She excitedly yells back, slamming her fist to the table.

The camera switches to the ring, showing an enraged Luchador-styled Minotaur in a bright green mask running towards her opponent, a man three-fourths her size. He braces himself, waiting till she’s only a few feet away to spin out of the way, managing to grab her arm and change her trajectory from the ropes of the ring towards the turnbuckle headfirst.

A loud bell like ding resounded upon impact, everyone flinching at the sight and sound. It was common knowledge that a minotaur’s skull was stronger than steel, but just because it wouldn’t break, it doesn’t mean it wouldn’t hurt.

“Tonight, we have a competitor that is defying the odds. A no name man picked out of the dozens of candidates for the yearly Trials of the Valkyrie Battle Royale. We saw him rise to fame with the preliminaries throughout the year, but no one would’ve guessed that he would’ve made it this far!”

“Amy, for our viewers who are just tuning in, what is the Trials of the Valkyrie?”

“Of course Glenda! The Trials are a yearly competition, where we get the finest fighters around the world. The best of the best. No matter what part of the world, what style, or species, we find them and have them join to be put in the ring with male contestants who will must try to best them in combat. As we can see, we have notorious Yessenia Valentina, the minotaur luchador from Mexico currently in the ring. She was the winner of the Mexican National Heavyweight Championships three years running!”

“And what exactly is the point of these trials?”

“Originally it was a way for Valkyries to train and select heroes, by having them fight them one after the other. Later on, it was used to help select who would be the mentor for these heroes. The Valkyries that defeated them were given the opportunity to take them under their wing and train them for greatness. But it has long since passed those ancient times, now our mentors are no longer just Valkyries, and the if they defeat the ‘hero’ part, it is no longer limited to just gaining a new apprentice. If one of our ‘Valkyries’ win, they are given the chance to marry their defeated opponents as well as win all the accumulated prize money that they have accrued thus far.”

“That’s right folks! No name over here is at the semi-finals right now, wining just under half a million dollars in prize money. If he wins, he can go on to the next round to fight the Salamander Queen of the Ring herself, Sasha Flair, or he can pack up his suitcase and go home with everything he’s made.”

“It looks like he’ll be making that decision real soon Glenda!”

Back to the ring we can see Valentina swaying as she tries to keep herself balanced. The knock to head taking its toll on her. Her opponent took the opportunity to climb onto the top rope in the corner of the ring, readying himself for final strike.

When she turned to face him, he leapt towards her like a mucus toad, his legs wrapping around her neck, his body swinging down and the momentum causing her to drop to the ground.

She wasn’t getting back up.

The crowd held its breath as they watched her opponent rise.

His body covered in sweat and bruises, having made it seven rounds of nonstop fights so far, he was about to finish the eighth.

Stepping over the unconscious minotaur, he kneeled down, rolling her onto her back, and began to pin her down.

The checkerboard golem referee ran up to the two, slamming her hand to the ground as she yelled out the count.

“No man has ever made it this far.”

The bell rang, the man rolling off the minos to take a moments respite before the next match.

“LADIES AND GENTLEMEN! HE MADE IT!”

Many in disapproval, it seems Valentina was a favorite amongst the crowd as the sound of ripped papers soon followed with the throwing of torn up betting stubs.

“This truly does mark a day in MWE history.”

“We’ll return after a short break!”

Pillars of fire burst from the floor as the Queen of the Ring made her entrance. The lights darkened to debut her as the monitor above the walkway featured an erupting volcano.

The Salamander, who was decorated in a staff and crown made of obsidian that glowed similarly to lava began to make her way down the walkway.

The crowd began to cheer for her, many crying at the sight of their idol.

Her soot-like robe dragged across the floor, producing a small black cloud with each step she made.

The spotlight was on her.

She extended her hand, to which the referee immediately handed her a microphone.

“Welcome stranger. Congratulation on making it this far. No one has ever made it to me. But this is where it ends. I will give you the chance to end this now. Go home while you still can. Because once this fight starts, it’ll be over for you.”

The crowd was still silent, now their attention focusing to her opponent.

Rather than responding, he went to his place, and took a fighting stance.

“Very well! Your fate has been sealed!”

The salamander handed the microphone back to the golem and made her way to her spot.

The lights returned to normal.

The crowd could not be silenced. They screamed, they yelled, they cheered for the Queen.

In a single smooth motion, she tossed aside her crown and robe towards the crowd, many of the audience members scrambling in hopes of claiming them.

“Ladies and gentlemen. The fight of the century. All-Time Champion of the ring, the very Queen of the Ring herself, SASSSHHHHAAAAA FLLAAAAAAAIIIIIIIIIIIRRRRRRRR!”

Fireworks went off around the arena once more for her introduction with the crowd yelling and cheering for her.

“And her opponent! The man no one thought would make it! The winner of Trials Preliminary Rounds, the man who bested the best of the best, making it past not one, not two, but eight! EIGHT of the Trials of the Valkyries! Give it up for the underdog, Marcus WILLLLLIIIIAAAAAMMMMSSSSSS!”

Several boos and profanities were tossed around, but not all of them were negative. A handful could be seen cheering the underdog, while some of the mamono managed to make a sign in the short amount of time saying “PLEASE GIVE ME YOUR BABIES” in hastily written marker.

It was a fight no one expected, one no one could see. And one no one would ever forget.

The crowd was crying. Many yelling at Sasha to get up. Don’t let them down. Please show him his place!

Marcus. A man no one thought could make it, with enough blood and bruises all over him to make Rocky seem like a pansy, had won.

The Salamander Queen, Sasha, was lying on the ground, the flames on her tail all but gone with her will to fight. She had been defeated by a nobody. She laid there on the mat, waiting for the countdown to begin.

Even the Golem, a being that was mostly void of emotion, was shocked by the very site, struggling to get herself to the ring and begin the count.

“How could this happen…”

Marcus lightly placed his foot over the shoulder of the Salamander, prompting the Golem to begin.

“We can’t let this happen.”

Marcus’ foot flew off Sasha’s shoulder as he was thrown to the ground.

Everyone in the crowd looked up in shock at the sight.

Amy, the ratatokr host, had entered the ring and kicked Marcus off of Sasha.

“LADIES AND GENTLEMEN! AMY HAS ENTERED THE RING!”

The cheers from the crowd could be heard from blocks around.

“SUPER FEATHERWEIGHT CONTENDER IS ENACTING DRACONIC TRADE OFF RULES OF MINIONS! YOU CAN TRADE OFF A FIGHTER FOR ANY OTHER AS LONG AS THEY ARE TWO OR MORE WEIGHTCLASSES BELOW YOU! THE FIGHT GOES ON!”

The camera zooms in as Amy begins to strip off her blazer and continue the fight.

The screen begins to form static as the announcer continues.

The screen goes blank, and the image of a young ratatokr could be seen in the reflection of the glass.

The VCR ejects the tape, signifying that it was the end of the recording.

“Damn, I wish we had gotten the rest of that.”

“What happens next mommy!”

“Oh sweetie, that’s easy.” She smiles, looking up at the belt sitting above the television set. “But now you know how mommy met daddy.”

“I want to watch it again!” she exclaimed.

John Fong is a lawyer for the Yangs, a high-class family in Hong Kong. Read More
rserenity
2 post(s)

A writer of many monstergirls, though with a weakness for manticores and ushi-oni. I've been writing for a few years now and look forward to continuin Read More
Sukiru Ikeda
1 post(s)