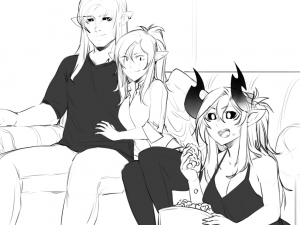 She threw her head back and let out a silent scream as her own orgasm enveloped her.

Haohi continued riding, almost spasmodically, and soon her husband’s followed suit as he, too came, shooting ropes of semen into her and filling her to the brim.

They both held each other for a couple of seconds, before she quickly climbed off of him and covered them both with the blanket.

She cleared her throat, trying to steady her breathing, and leaned into her husband, a satisfied smile tugging at the corners of her mouth.

“That was wonderful. We should do it again sometime.”

Akai raised an eyebrow at her. “One of these days, you’re going to get us into trouble.”

“Shhh!” Aiko said without even turning around.

Husband and wife looked at each other once again. Then they both burst into laughter.

John Fong is a lawyer for the Yangs, a high-class family in Hong Kong. Read More
Shoggocks
1 post(s)

Like his alcohol and snake women like he likes his love. Smooth and robust. Read More
Banis
1 post(s)

This user has not entered any information Read More