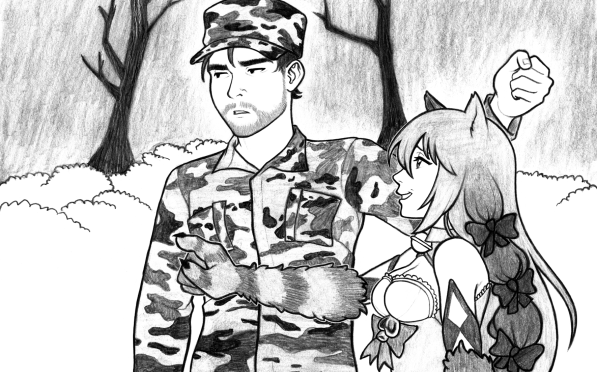 Just a short story of Cheshire antics to get back on the writing track. Introducing Nymph and the Duchess and getting Tyler a more suitable sense of fashion.
Art: Tyler and Nyu Nyu, by XL Bantz aka Dan

Tyler Emond, an American soldier ripped from his station in Jordan and plunged into the debauchery of Wonderland. Nyu Nyu -his Cheshire Cat tour guide- tries leading him into one lewd and unusual situation after another. But Corporal Emond devises a plan to turn the table on his Cheshire companion.

“Since my whole team was with me, I witnessed them all change right before my eyes. ” He stared off to the side. I could tell he was picturing it as if it happened a few hours ago instead of years. “It was breathtaking. I probably looked like a damn fool, standing there with my mouth wide open in shock. I looked at them and took in every new detail. The changes were radical but not enough to be unrecognizable. While I was taking mental notes of their new features-”

“You were gawking at them.” After I cut Daniel off, he tried to hide a stupid grin and failed miserably.

“Yeah, their new features took me by surprise and I was gawking like an idiot. Even so, they never stopped looking into my eyes. I said corporations, scientists and crime groups felt lost. Well that wasn’t the case with Pokémon trainers. I’ve been with my team through thick and thin. We’d do anything for each other. When I looked them in the eyes I knew that wouldn’t change.” I think we can all agree with that sentiment. If nothing else, our bonds with Pokémon have grown stronger since they ascended to their new forms. But there was a reason that I specifically chose James for this interview. As most of my readers know, I talk with fourteen people every year to find out where they were when the Day of Ascension happened. It was interesting to find out what such an intriguing character and his Pokémon were up to on that day, it was only half the reason I contacted him.

A few months ago, I dug up a report done by the Peace Front claiming that Daniel knew what caused all Pokémon to change. Boy was that a shock! When was the last time any of you watched the news or read a scientific journal where there was more than just speculation on what caused the change? I had to ask him about that report but he told me not to get my hopes up for a big scoop. According to James, it was debunked like all the other theories that professors spent so much time working on. Perhaps one day we’ll find out what caused Pokémon to change but even if James gave me all the answers I needed for a story of the century, it still wouldn’t have been as important as the fact that we have always lived alongside these fantastic creatures and nothing could cause that to change. From Daniel Carson and his Pokémon to us: “Have a happy Valentines Day.”

A Raiju finds out that mirrors aren’t enough. What she needs is a rapt audience.

Special thanks goes out to the one that gave me the idea for this story. When I told her about the idea she was overjoyed and very enthusiastic to help me brainstorm. To be honest, if it wasn’t for her help and input, this story would never have happened. Granted, it’s still a work in progress but It’s coming along great.

After a night of recuperation, Tyler is ready to face the new world and look for a way back to the old one. But his companion has other ideas.

Fiona enjoys her day off as a maid while the Incubus takes care of the houses chores and tries to guide her towards her new life as a monster.

Fiona and the Incubus experience fireside passion before in the early hours and neither expects what happens next.

“Deep down, every mistress wants to beg and every maid wants to be treated like a princess.”

Who marries the King? You decided and now we get to see the results.

Who marries the King? You decide!

A storyteller's game, Lips that intoxicate,The core of all life is a limitless chest of tales Read More
Aftyn
1 post(s)